The BY brand decided to set up broom parking stations

The company decided to host a comic environmental event 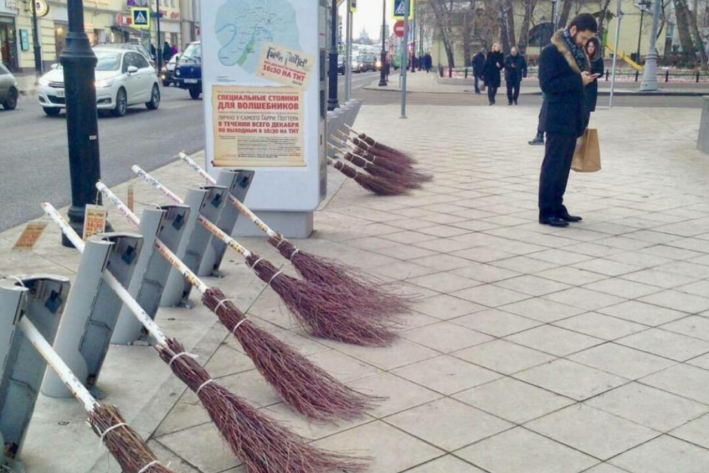 In the company, they joke that anyone can come and rent a broom and then quickly fly wherever they need to go. What’s more, returning the broom to the station you took it from is not obligatory. Simply park the broom where you can (while not getting in the way of other road users) and anyone else can simply take it from that spot. Carsharing is so last century, now ‘broom sharing’ is all the range!

The BY brand observed that the advantages of this new form of transport are obvious: you won’t get caught in traffic jams, you can breathe fresh air, and not get in the way of either pedestrians, drivers, or cyclists. Now getting to any location will be so much more convenient, easy and of course, more pleasant. It’s worth noting that the broom is a completely ecological mode of transport and flies using its own force, meaning that no harmful gases are released into the atmosphere.

Of course, there are downsides too: the brooms are only available to people who are 18 or over. You don’t need a licence, but if you do plan to make use of this mode of transport, then you should submit an application in advance to Baba Yaga (as the owner and proprietor of the business). The application should make clear that you only plan to use the transport for personal needs. All broom taxis are prohibited.

At the very beginning, as the ‘broom sharing’ project is being rolled out, you can choose the most convenient route by yourself and fly whichever way you want. However, if the project becomes successful and many people express a desire to try out this new mode of transport, then the business owner (Baba Yaga) commits to creating an air corridor for everyone (similar to those arranged for aircraft). This will be in order to minimise the number of accidents which could occur due to the carelessness of the broom drivers.